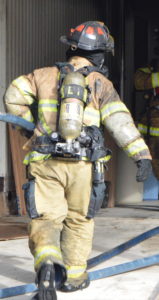 OFR Engines 1, 3 and 5, Rescues 1 and 4, Tower 1, Battalion Chief 11, and a Safety Officer were dispatched to the call. Engine 5 arrived on scene within three minutes to find a working structure fire and a burn victim outside the home. The patient advised that a second person was trapped inside.

While Rescue 1 worked with Marion County Fire Rescue in preparing the burn victim for transport, Rescue 4 and Engine 5 crews began fire operations with a search for the victim inside. As crews made their way to the rear of the structure the second patient was located. Unfortunately, the second patient had succumbed to injuries sustained.

The fire was under control within twelve minutes. The burn victim was transported as a trauma alert to UF Health Shands Hospital.

The cause of the fire is unknown. The State Fire Marshal’s office will be leading the investigation.