Baby Boomers Still Playing Together Even “Party Gaming” on Zoom 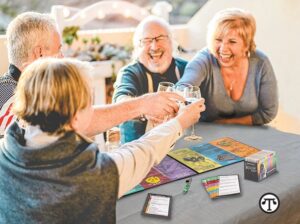 A new pop culture trivia game is taking Boomers on a nostalgic road trip back to the ’50s, ’60s, and ’70s. Designed to be played by two teams, Boom Again features thousands of questions drawing upon Boomer’s memories of advertising slogans and jingles, politics and social movements, movies, music, television, and more. \

Groups of Baby Boomers are laughing their way through memories on a wide variety of their experiences: from The Twist to Disco; American Bandstand to Soul Train; Doris Day all the way to Janis Joplin, and on to Steve Martin; Hula Hoops to The Pill; and poodle skirts to mini-skirts. And they are singing their way through all the music of their youth, too.

This game is clearly not an S.A.T. test with questions like:

The wide array of material is organized into easily remembered categories:

A Box Full of Memories

The game comes packaged in a “cigar box” familiar to Baby Boomers who stashed their stuff in those as kids. It has two boxes of cards with 2,244 questions, and Boomer era tokens including a Metal Skate Key, a “Students For Kennedy” Button, a center insert for a 45-RPM Record, and more.

There’s even a “Boomers’ Little Helper” magnifier in case someone forgets their readers.

An Antidote to Pandemic Isolation

Apparently nothing can keep a social Baby Boomer from hanging out with their friends. Party games have always brought people together. Now, even when friends and families haven’t been together in person, they have been playing Boom Again together on Zoom. It’s become known as a Boom Zoom!

For further facts and to order the game, go to http://www.boomagain.com.