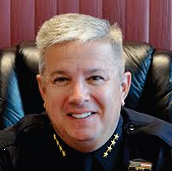 On January 23 the normal Lady Lake commission was called to order and the floor was opened to public discussion. Before anyone from the public could respond, Commissioner Hannon asked for the floor.

Mayor Richardsons said it was highly unusual but gave approval. Commissioner Hannon said he was saddened that Chief McKinstry quit. He said he had heard from many constituents asking him to do all he could to rehire the Chief.

Betty Salas then approached the podium with a petition of 168 names requesting the Chief be reinstated. 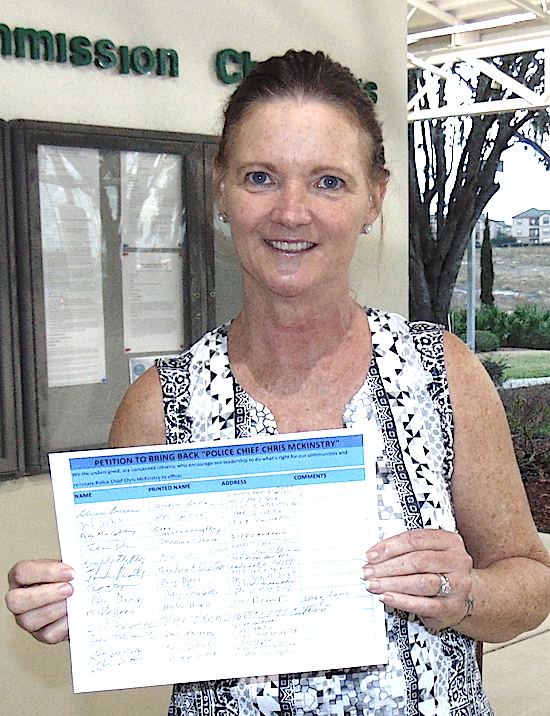 Betty Salas, a local business person standing up for Chief McKinstry, is holding a petition of 166 names of residents asking the Town Council to consider reinstating him. The meeting that followed blew everyone away. It was so much that a second meeting was set to discuss the issue and to discuss reviewing the Ex-Chief and Town Manager Kollgard’s actions. Two Commissioners were not happy about the Chief being forced out! The others knew in advance and let it happen. Go to the meeting on the Feb 4 at 1 pm to watch and listen!

Ms Salas also said that she knew the previous chief and that when the commission hired chief she was assured he was the right man for Lady Lake. She got to know him as did the businesses and residents of Lady Lake as well.

Town Manager Kris Kollgaard then read a statement that said she and the Chief have had professional differences in management styles for the last 6 years and that this was the last time. She contact the commissioners the night before and said the morning meeting would have only one of 2 outcomes. Up until this meeting the general public was told no one at town hall knew why the Chief quit, just that he did. Now we are finding out the truth.

After the statement was read by Town Manager Kollgaard, Commissioner Vincent challenged her management skills, saying she shows favoritism, and micro manages all departments, gives raises to those she likes and not to our police force, and called for her resignation. Kris Kollgaard response was “Go For It”. Of course this created a stir among the commissioners as they had to see if they could even discuss this or if a special meeting had to be scheduled.

The next public comment was made by Phil Mathias who said he had spoken to 8 officers who have quit working at Lady Lake and the reason they left was due to the low pay scales and no other reason. Kollgaard tried to interrupt. Mathias was not letting her, saying he had the floor and it was his turn to talk. Phil then looked Kris in the eye and said “Kris it is time for you to go!” The commissioners then discussed what they would have to talk to ex-town employees, officers and the Chief and that they felt the problem stemmed from different management styles and that the town charter allows the Town Manager to hire and fire all her employees without the commissioners’ say so.

Public opinion is that the residents do not want to lose Chief and now it appears that one issue has turned into 2. Can Chief come back? Is Kris’ management style still good for the town? I believe there is a way out of this! First, put the Lady Lake Police Department under the Town Council. Keep the Town Manger under the Town Council on an equal levels. Second, review their Job descriptions, describing what you expect of them! Then review the complaints from past employees about being micro managed and work with the Town Manager to tweak her management style. There are training seminars that could help!