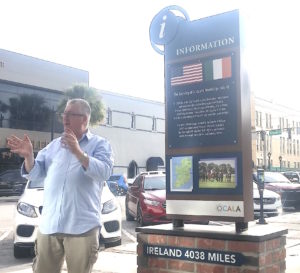 (Ocala, FL) A sign was unveiled this week that has been erected on Ocala’s downtown square. The sign commemorates and recognizes a twinning agreement with Ocala’s sister town located in Newbridge, Ireland. The official agreement linking the two communities was finalized ten years ago and was signed by the mayors of both towns. “The concept of twinning among towns helps promote the sharing of culture, and has resulted in lasting bonds of friendship” states Charles Eades, chairperson of the Ocala Twinning Committee.

Attending the ceremony were officials from the City of Ocala, Ocala Mayor Kent Guinn, a delegation visiting from Newbridge, and Ocala Twinning committee members. The sign includes information about the twinning, a display of the American and Irish flags, a map pinpointing the location of Newbridge, and the fact that Ireland is only 4,038 miles away.

In the photo, former mayor of Newbridge Murty Aspell says a few words to a group gathered during the unveiling ceremony.