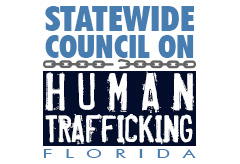 Members include law enforcement officers, prosecutors, legislators, as well as experts in the fields of health, education and social services. The Council was created through legislation passed and signed into law in 2014.

The International Labor Organization estimates that there are 20.9 million victims of trafficking around the world. Domestically, Florida continues to rank third in the nation in the number of calls to the National Human Trafficking Hotline.

Victims of human trafficking include children, women and men who are subjected to sexual exploitation or forced labor through force, fraud or coercion.

According to a study of U.S. Department of Justice human trafficking task force cases, 83 percent of sex trafficking victims identified in the United States were U.S. citizens. The average age that a trafficked victim is first used for commercial sex is 12-14.

Make recommendations for apprehending and prosecuting traffickers and enhancing coordination of responses.

Hold an annual statewide policy summit with an institution of higher learning.

Work with the Department of Children and Families to create and maintain an inventory of human trafficking programs and services in our state.