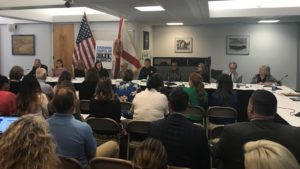 Florida continues to rank third in the nation in the number of calls to the National Human Trafficking Hotline. This horrific crime is plaguing our state and we must remain vigilant on combatting this modern-day slavery. Taking an active role in this fight is especially crucial with the Super Bowl coming to Miami next February. Major sporting events attract thousands of visitors from around the world and can also create a temporary and illegal market for human traffickers.

We are starting now, sending a consistent and strong message to those engaging in human trafficking during the Super Bowl that we will have thousands of law enforcement officers and transportation providers trained to spot and report illegal activity.

In addition to ramping up our efforts for the Super Bowl, our statewide council also discussed our new local human trafficking task forces across the state. I am thrilled to say that Florida now has local task forces that encompass every one of Florida’s 67 counties. This assures that every area in our state has an active and engaged task force to combat trafficking and support victims. For more information on our local task forces, click here.

Fighting human trafficking continues to be a top priority for the Attorney General’s Office, and I encourage Floridians to get involved too. You can learn how to spot and report human trafficking by visiting YouCanStopHT.com. Anyone who encounters someone who appears to be a victim of trafficking should call local law enforcement immediately, and then report the incident to the National Human Trafficking Hotline at 1(888) 373-7888