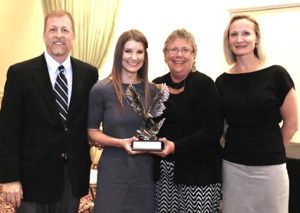 MVP Athletic Club was honored May 10, 2017 as more than 300 local dignitaries looked on, receiving the 2017 Lake County Community Service Award for involvement and service in our The Villages – Spanish Springs Town Square, The Villages – Brownwood Paddock Square, Boys & Girls Clubs of Lake and Sumter Counties and Lake County communities

Shanwlei Breeding Eagle Watch Coordinator of the Audubon Center for Birds of Prey in Maitland, FL  and  volunteers will discuss  this 25 yr  citizen science program that monitors bald eagles in central Florida.   Volunteer training for Eagle Watch will be held in late summer.

OCALA, Fla. (April 21, 2017) – If not yet in full bloom, the economy is certainly growing stronger in the CareerSource Citrus Levy Marion region.

According to today’s employment summary by the Florida Department of Economic Opportunity (DEO), the unemployment rate in March for the CareerSource CLM region was 5.2 percent, down 0.7 percentage point since February and 0.6 percentage point lower than the area’s rate a year ago of 5.8 percent.

Additionally, the DEO reports that the Ocala metropolitan statistical area (MSA) posted 103,700 nonfarm jobs in March, an increase of 4,000 new jobs for a 4.0 percent growth rate over the year. That’s the third fastest rate among all Florida’s metro areas.

For the third consecutive month, the Ocala MSA continued to hold the fastest annual job growth rate compared to all metros in Florida in professional and business services, at 11.0 percent. The Ocala MSA had the third fastest job growth rate in mining, logging and construction at 10.4 percent.

“This is exactly what we like to see: expansion of the labor force fueled by strong job growth,” she said. END_OF_DOCUMENT_TOKEN_TO_BE_REPLACED

BRADENTON, Fla. — Today, Governor Rick Scott announced that Florida businesses created 53,800 private-sector jobs in the first two months of 2017, bringing the total number of new jobs added since December 2010 to 1,346,200. Governor Scott made the announcement at Bealls, Inc. in Bradenton. The retailer, which is headquartered in Florida, has created more than 300 jobs across the state over the past two years and employs more than 8,500 Floridians.

Governor Rick Scott said, “I am proud to announce that Florida’s private-sector businesses have created nearly 54,000 new jobs in 2017. Over the past six years, we have been relentless in our efforts to make Florida the most business-friendly state in the nation because a job is the most important thing to a family. It is incredibly disheartening that politicians in the Florida House have voted to jeopardize programs that create opportunities for our families, visitors, military members and job creators. However, we will continue to fight for important economic development tools like Enterprise Florida and VISIT FLORIDA and the critical impact they have on supporting our growing economy.” END_OF_DOCUMENT_TOKEN_TO_BE_REPLACED

FLORIDA– Governor Rick Scott announced that Florida set another record in tourism by welcoming the highest amount of visitors in the state’s history with 112.8 million visitors in 2016. This is the sixth consecutive record year for visitation to Florida, exceeding the previous high of 106.6 million in 2015 by 5.9 percent. Tourism jobs also hit a record high in 2016 of 1.4 million jobs, exceeding the previous record in 2015.

Governor Scott said, “Today, I am proud to announce that Florida has once again welcomed a record number of tourists with 112.8 million visitors to the state in 2016. Visitors spent $109 billion and supported a record 1.4 million Florida jobs in 2016 – a testament to the vital importance of tourism to our growing economy.  END_OF_DOCUMENT_TOKEN_TO_BE_REPLACED