The Expo was held on the Lady Lake Soccer field. Each Vender had a tent and table set up to show their business literature  and educate them on how best use that business, there were probably almost 30 vendors. Wrapped all the way around the vendors was a car show with vintage over a hundred cars. It took me back to the old days, love those vintage cars & trucks. I was a car collector years ago, I had a 36 Buick Coupe, a 37 dodge pickup, a couple of 32 ford in various condition to make street rods with, 39 Ford coupe with a 389 cubic inch pontiac engine, a couple of Packards, 57 Chevy two door and etc . I miss the 57 Chevy most! Anyway the cars on show were mint.

Three People Being Charged With Manslaughter In Infant Drug Overdose

On May 19, 2022 at approximately 9:30 a.m., Lake County deputies responded to a home located at 42221 Dogwood Avenue in DeLand regarding an unresponsive four-month-old male infant. The infant, Logan Bixler, was transported to AdventHealth DeLand where he was pronounced dead.

Detectives began investigating, at which time methamphetamine was discovered in the home.

Following the Medical Examiner’s autopsy on the child, toxicology results were received on September 9, which showed that methamphetamine was present in Logan’s system. The results indicated that the death was sudden after ingestion, likely by consuming or inhaling methamphetamine. The official cause and manner of Logan’s death was determined to be accidental overdose on methamphetamine. END_OF_DOCUMENT_TOKEN_TO_BE_REPLACED

On July 17th 2021 Lake County Sheriff’s Deputies along with EMS responded to 16815 Sarah’s Place, Clermont regarding an unresponsive male in a vehicle in the parking lot. The individual was identified as Pavel Mata who was transported to Four Corners ER where he was pronounced deceased. An autopsy was performed on Mr. Mata however a cause of death was undetermined pending toxicology testing.

On August 23rd 2021 toxicology testing returned indicating a lethal dose of Fentanyl was present in Mr. Mata’s blood; the cause of death was updated to indicate “Accidental”.

Detectives continued their lengthy investigation to include DNA testing and forensic digital searches. As a result it was learned that an individual named “Kevin” (who had been known to be present with Mr. Mata prior to his death) was in fact Kevin Richardson (06/01/1997). Surveillance video from the parking lot showed Mr. Richardson in the vehicle interacting with Mr. Mata. Mr. Richardson was located and interviewed by detectives at which time he admitted to obtaining what he claimed to be a Percocet pill from an unidentified drug dealer and provided it to Mr. Mata. Mr. Richardson stated that he observed Mr. Mata to need medical attention after ingesting the pill but claimed Mr. Mata declined; thereafter Mr. Richardson left Mr. Mata’s presence. According to detectives the alleged Percocet pill was likely counterfeited and contained a lethal dose of Fentanyl. END_OF_DOCUMENT_TOKEN_TO_BE_REPLACED

Lake County sheriff’s deputies responded to the area of Merrell Avenue in Umatilla just after 3:25 p.m. this afternoon regarding a report of shots fired. Upon arrival, responding deputies discovered an adult male at a residence located at 38946 Merrell Avenue who had been shot. Paramedics attempted to transport the male to AdventHealth Waterman in Tavares; however, he passed away during transport.

The identity of the deceased male is not yet being released.

Anyone with information concerning this incident can call Central Florida CRIMELINE at 1-800-423-TIPS, where they can remain completely anonymous and can be eligible for a cash reward.

This is an ongoing investigation and additional details will be released as they become available.

A 33-year-old Leesburg man is in custody following an investigation into a drug-related death that occurred in June 2022.

Detectives began the death investigation at a home located at 4100 Holly Hill in Lady Lake on June 25 when the deceased, 38-year-old Harry Cooper, was found in a bedroom along with evidence of drug use. The Medical Examiner’s Office ruled Cooper’s death as an accidental drug overdose of fentanyl.

Detectives have worked diligently throughout the course of this investigation and based upon phone records and surveillance video, they determined that 33-year-old Albert Robert Springs of Leesburg is the man responsible for dealing the lethal drugs to Cooper.

Detectives obtained an arrest warrant for Springs and he was taken into custody on Wednesday, November 16. He was booked in at the Lake County Detention Center with no bond on a charge of Death by Unlawful Distribution of Fentanyl.

His booking photo and additional information can be found by visiting www.lcso.org and clicking the “Inmates” tab.

Fair Tax Has Your Back 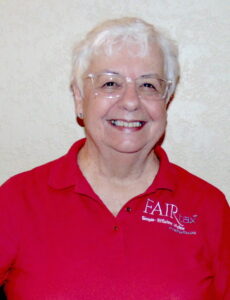 Elaine Has Your Back

Ron and Elaine came to Florida after having a successful trucking company up north. They sold it and moved to Florida. Ron and Elaine Maillaro got involved with Fair Tax listening to Neil Boortz and reading the Fair Tax book by Boortz and Linder. They started volunteering in 2008 just after the establishment of the Florida Fair Tax Education Association ( 501c (3) ). They became presenters then they were elevated to Marion County Co-ordinators then to District Co-ordinators to finally Ron made President and Elaine made Secretary of the FFTEA. Their mission is to change how the government is funded by enacting HR 25, the Fair Tax Act. A system based on consumption rather than income.

I have known Ron and Elaine for about ten years and they have worked hard to educate people on the Fair Tax and signing up politicians to further the Fair Tax Cause and to get rid of the IRS.

What is Fair Tax and how does it work? For instance if you buy a car you pay tax, the second and the third time that car is sold there is no tax, no double and triple taxation and you are not taxed until you buy something. You pay tax once on something and that is it! No tax unless you spend!

The Lady Lake Library and Coping with Dementia LLC have announced that free ABC of Dementia workshops will be offered from 10 a.m. to noon on Monday, November 28 and Friday, December 16 in room 204 at 225 W. Guava Street in Lady Lake, Florida.

Coping with Dementia President and workshop presenter Debbie Selsavage reports, “Our ABC of Dementia workshop explains Alzheimer’s and other forms of dementia in plain language, suggests techniques for becoming a better and less-stressed care partner, and provides useful resources to families living with dementia.”  She adds, “While they are designed primarily for care partners and family members of a loved one living with dementia, anyone is welcome, including persons experiencing dementia.”

While the workshops are free, reservations are encouraged.  For more information or to reserve seats at any of the workshops, call 352-422-3663 or e-mail deb@coping.today.

The Last referral luncheon of the year was held last week. In looking at the picture it was well attended. I spoke about the “Inflation Buster” I sold a three month deal at that meeting. So if you have the right product and your not shy you can move a product or service. There are only 6 inflation buster ads left…Limited offer. Their a good bunch of business people, so go visit the Lady Lake Chamber next month at the Lady Lake Soccer field outdoor expo.

Belleview Chiropractic Clinic celebrated the grand opening of its new location with a ribbon cutting. Dr. Michelle and her friendly staff are ready to take care of you!

PPL Motorhomes in Summerfield, FL hosted a ribbon cutting and grand opening event for their first location in Florida. The company is based out of Texas and recently acquired what was previously RV Swap Shop.