Join us for 10 FREE concerts and 10 non-profit intermission activities, as well as food trucks, non-profit vendors, and artisan vendors. Stay tuned for the 2022 lineup release!

The Native American blues-rock group Indigenous consists of three brothers, Mato Nanji (vocals and guitar), Pte (bass), and Horse (percussion), and their sister, Wanbdi (drums, vocals). The Nakota Nation members grew up on South Dakota’s Yankton Indian Reservation and were inspired by their father, Greg Zephier, who had been a musician in the ’60s and ’70s and later became a spokesperson for Native American rights. The group released its 1998 debut album, Things We Do, on Pachyderm Records; the video for the title track was directed by Chris Eyre, who also directed the award-winning Native American film Smoke Signals. The group released the Blues This Morning EP and Live at Pachyderm Studios in 1999, while winning acclaim from critics and artists like Bonnie Raitt, the Indigo Girls, and Jackson Browne. The Circle followed in 2000. The band has continued to create music and tour ever since. 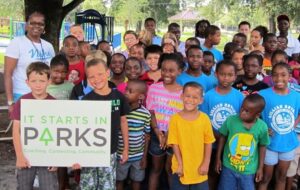 It is an unfortunate reality that not all kids can afford to participate in paid recreation programs and summer camps. At the City of Ocala, we endeavor to ensure that every child has an opportunity to participate. You can help us continue to make constructive play time a reality for underprivileged children by making a donation to the Let them PLAY! Scholarship Fund.

Thank you in advance for your investment in Ocala’s children.

In Marion county, for eight years, the first Saturday in March plays host to the largest festival in our area known as Habitat for Humanity of Marion County’s Strawberry festival. This last Saturday, March 5, 2022 was no different!

This year’s strawberry festival saw 35,000 +/- visitors enjoy strawberry treats of all kinds, local entertainment on two stages, a car show, a strawberry pie eating contest, a chance to shop over 250 vendors and a giant kid’s zone with fun for kids of all ages! The 8th annual strawberry festival was located at the McPherson Government complex on NE 25th Ave where plenty of parking and open spaces allow this festival to grow year after year.

The Habitat strawberry festival in Marion County represents a piece of American history when county fairs and festivals brought communities together. All proceeds made at the festival go towards building a home for a Marion County family in need. A Habitat home is built with mainly volunteers, including the future homeowner. The strawberry festival also is alive with volunteer spirit and known for uniting people from all parts of the county. When the habitat homeowner completes their required volunteer hours (averages 250 hours) and is handed the front door keys to their new home, their first mortgage payment is likely to be sweeter than the strawberries sold at this year’s festival. Only for that habitat family, the safety and security they receive from the new home lasts longer than any of the sweet treats enjoyed at the festival.

If you missed Habitat’s strawberry festival this year, be sure to save the date for next year. It’s always the 1st Saturday in March and thousands of festival goers will tell you that a good time is had by all!

The Parade of Senior Services was a great success. My contacts were the Senior Center on 8th ave, they did a great job. It was free to seniors 55+ and they came. The doors were open from 10am till 2pm, by 10;30 the room  was packed with visitor’s. At first they projected 50 agencies would exhibit, I am sure it exceeded that number. I was not disappointed with the crowd. I gave out hundreds of my newspapers. It was held at the College of Central Florida. I was impressed by the Colleges staff, they were well dressed, very organized, friendly and very helpful. I’ll do it again next year.  Information given out was about Marion County’s programs and services that included City, County, state and federal government services, health care, social services and more! 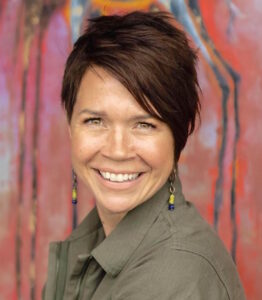 Cara Van Leuven‘s lifelong obsession with horses is probably like yours — it’s in the blood; it’s an impossible attraction and addiction. At the age of nine, Cara began taking riding lessons and knew, due to the likes of Touch of Class, Big Ben, and Abdullah, she wanted to jump. Throughout middle school and high school, Cara showed in hunters, eventually finding true love in the jumper ring.

Life with horses seemingly ended when Cara left her hometown of Ft. Wayne, Indiana to study photojournalism at Western Kentucky University. Although she did remarkably well with a camera and earned internships every summer working as a photographer at newspapers throughout the country, the loss of horses was marked.

Solace needed to be found so Cara turned to hip hop. Yes, you read that right. When she wasn’t break-dancing, she wrote graffiti in her black book and occasionally on dumpsters and walls. Her love of art wasn’t found so much in art museums, but rather on the side of trains.

After graduating, she spent time in Duluth, Minnesota, and London before settling in Albuquerque, New Mexico. She worked quite a bit in design but could not find comfort in the corporate environment. Eventually, a transfer to St. Louis, Missouri reshaped her lifestyle thanks to the 2008 recession. END_OF_DOCUMENT_TOKEN_TO_BE_REPLACED 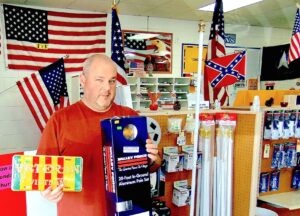 Flags & Flag poles is a local store in business for over 18 years and is run by the Marshall family George, Bill & Linda. George’s father Bill a vet and George’s mother linda keep’s busy with sales  thanks to the strong support of local customers in the area. We urge you  to buy local from family-owned businesses.

The Marshall family have been able to stay busy through the past year with sales and installing flag poles in the local area. Having a retail store in lady lake also helps so people can walk in and see the supplies the store offer’s and purchase local on site. They also offer discounts on most products when you pay by cash or check. When you buy local you help support a small business like the Marshall locally family owned and  operated store. 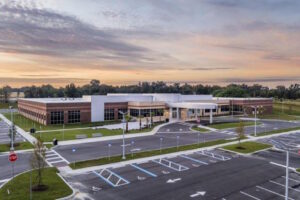 Good news for our veterans in FL-03: the new Ocala VA clinic is opened as of January 25th at 4826 SW 49th Road in Ocala! The clinic is fully upgraded and modernized to care for over 10,000 veterans, with patient-aligned care teams to increase efficiency and deliver streamlined services. All services will now be housed under one roof, including primary care, mental health, audiology, podiatry, Telehealth, and more. Interested veterans can enroll in comprehensive healthcare services at this location by calling the enrollment office at 352-369-1328. 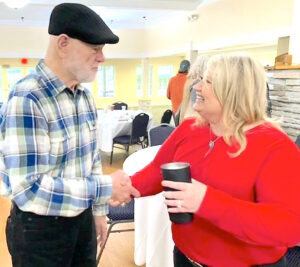 Pictured is Clark Yandle long time supporter of North Magnolia and Ocala Florida Development is greeting Kat Cammack at the OBL Club breakfast. Kat is a busy Lady touring to many business communities discussing her plans and asking her constituents what they are concerned about.

Kat Cammack grew up on a farm and knows  the rural and city ways of life! She is a force to be reconed with. 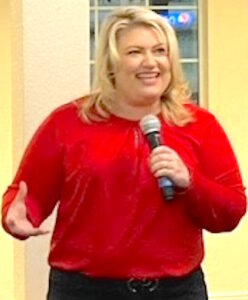 “This morning, I had the chance to visit and speak to over 70 business leaders in Ocala at their weekly breakfast meeting. We discussed what our team is doing to advance business-friendly policies at the federal level, fighting back against unconstitutional vaccine mandates for employers, combating inflation and rising prices, and how we can continue to ensure Florida’s Third is the best place to do business in the Sunshine State. Thanks for having me – looking forward to seeing everyone again soon!” 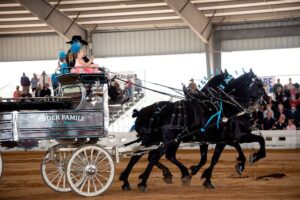 (Ocala, FL) – Ready to hear and feel true horsepower? With twenty-one wagons and six to eight one ton horses pulling each wagon, you won’t have to leave the stands to feel the horsepower. Described as “organized chaos”, this incredible three day event features all breed Draft Horses pulling different types of hitches. Some Hitches have a single horse while others have an eight horse hitch, and everything in between. Hitches are put into competition based on the breed of Draft horse, number of horses in their hitch, and gender of the driver. This event will take place February 4th through February 6th. To purchase tickets and check out the schedule visit https://grandviewinvitational.com/schedule/.