If you recently moved here from out of state you should check with Christine Calvert, Page two in this newspaper. You may be eligible for Florida Healthcare Insurance now. Give her a call I trust her, 352-572- 8510 she won’t steer you wrong.

I have had several people say 2000 was a clean election, well it was not! I already printed the story about 2,000 mules now this one. They just convicted a women in Texas of 26 counts of voter fraud. She was in charge of voter harvesting operation who’s job was to change the results of the election. Gov. Greg Abbott recently signed a new election integrity law in the state.

I heard that Dr Faui said the COVID shot was not a vaccine. So I did a search and could find Dr.Fauci  name anywhere near the word COVID. Interesting! END_OF_DOCUMENT_TOKEN_TO_BE_REPLACED

Over the next several months, you are going to be frequently seeing and hearing Vote Yes! from the CEP. Our Board has formally endorsed the renewal of the 1 Mil School Referendum. This renewal is incredibly significant to the continued growth of our community. It is important to me that our community understands why you should Vote Yes!

First, this is neither a new tax or a tax increase. It simply maintains the status quo. The revenue collected from the 1 Mil are dedicated to several key areas: classroom size reduction, art, music, PE, library, and Career/Technical Education. Additionally, the renewal will allow the School System to continue to fund vital safety measures such as school resource officers. All expenditures are carefully reviewed by an Independent Oversight Committee. All of these are important initiatives but I want to highlight Career/Technical Education and Safety. END_OF_DOCUMENT_TOKEN_TO_BE_REPLACED

August 23rd is the date for party preference primaries and we want to make the customary plea of asking that you show up to the polls and help us elect strong, constitutional candidates that will carry us forward in to the general election. Be sure to look out for the new districts that were redrawn this year, you may not be voting in the same district number that you were previously. There are many maps floating around out there and various “find your elected officials” links online, but many of them either are not accurate or are not up to date. Always consult with your Supervisor of Elections if you are unsure.

We are thankful not to have drawn a primary challenger this cycle. It is a testament to the trust that you have placed in us, the strong team that we have built together, and our shared love for faith, family, freedom, opportunity and life. We have drawn a democrat challenger in the newly drawn Senate District 13. This district includes now all of Lake County and part of western Orange County. We look forward to the opportunity to contrast our principles of personal accountability, freedom and prosperity, versus the left’s vision of no accountability, big-government tyranny, and deprivation. END_OF_DOCUMENT_TOKEN_TO_BE_REPLACED

Apparently the assumed protection of using a NOTARY is bogus!

To be recorded, a document/deed has to be notarized.

The State of Florida is supposed to ‘register and regulate’ Public Notaries.

Your County Recording Department does not verify, or even check that a document is genuine.

Your County Recording Department does not verify or check that the Notary even exists! END_OF_DOCUMENT_TOKEN_TO_BE_REPLACED

Since 1985, the Lifeline program has provided a discount on phone service for qualifying low-income consumers to ensure that all Americans have the opportunities and security that phone service brings, including being able to connect to jobs, family and emergency services. Lifeline is part of the Universal Service Fund. The Lifeline program is available to eligible low-income consumers in every state, territory, commonwealth, and on Tribal lands.

The Lifeline program is administered by the Universal Service Administrative Company (USAC). USAC is responsible for data collection and maintenance, support calculation, and disbursement for the low-income program. USAC’s website provides information regarding administrative aspects of the low-income program, as well as program requirements. END_OF_DOCUMENT_TOKEN_TO_BE_REPLACED

Ocala’s cultural community is robust. It is comprised of organizations big and small, independent artists, arts education providers, and regionally known facilities and festivals, all of which provide the city and county with programs that range from the performing and visual arts to culinary arts and historic preservation.  The City of Ocala is a strong proponent of arts and culture in the community. This includes partnerships with local art organizations and the development of visual, performing arts and educational science programming.

In addition to these programs we utilize our public spaces, both interior and exterior, to provide exhibit and performance space to local, regional and national artists and cultural arts organizations.

(OCALA, FL.) July, 2022 – On Thursday, July 7, at approximately 1:48 p.m., Ocala Fire Rescue responded to reports of a vehicle fire at Outlaw Snax, 3031 W Silver Springs Blvd. Engines 3 and 4, Rescue 3, Tower 1, and Battalion 11, were dispatched to the scene. Upon arrival, units found a detached trailer filled with approximately 40,000 pounds of potato chips burning. The trailer was neither connected to a truck nor threatening any structures. Crews from Engine 4 and Rescue 3 attacked the flames using a pre-connected hose line, while firefighters from Engine 3 and Tower 1 prepared to deploy Engine 4’s deck gun – a high-capacity jet stream used to knock down fires with a clear line of sight.Using the jet stream along with an extinguishing agent, crews extinguished the fire. No injuries were reported.

You Are a Winner, Kathy Gray! 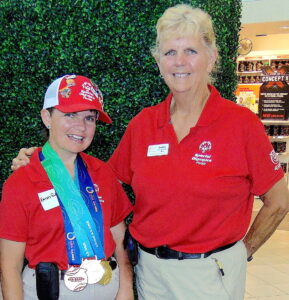 Pictured is Kathy Gray with her mother Betty Gray. Kathy won gold in Trail and Equitation and a bronze in Dressage. In all three medals. Her mother Betty Gray has a club called Stirrups and Strides. What a great event they had in Orlando. I am sure her and her mother is very proud. Kathy your a winner!

Gillum, once mayor of Tallahassee, is accused of acting in concert with associate Sharon Janet Lettman-Hicks to solicit funds using false representations and promises.

“The indictment further alleges the defendants used third parties to divert a portion of those funds to a company owned by Lettman-Hicks, who then fraudulently provided the funds, disguised as payroll payments, to Gillum for his personal use,” a Justice Department press release said.

Gillum is also charged with making a false statement to the FBI. He denied wrongdoing and said the case was political.

Gillum ran for governor of Florida with the Democratic nomination in 2018,  nearly defeating Ron Desantis.

Since then, he has been no stranger to trouble. END_OF_DOCUMENT_TOKEN_TO_BE_REPLACED